Posted on April 24, 2015 by alexandrapatrick

Wearable devices have been talked about as ‘the next big thing’ for a while. Wearables are growing in popularity, awareness is high yet familiarity is low. YouGov research predicts that wearable device penetration will more than double over the next year from 6% to 13% in the UK. 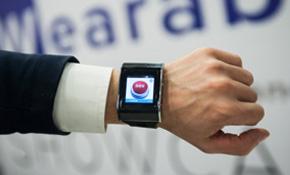 1. Most common – the largest category of wearables is fitness devices, such as a Samsung Gear Fit, Fitbit, Nike Fuelband and Jawbone account for 3% of the UK population wear one.

2. UK penetration – YouGov predict a steady increase is set to continue over the next year and by September 2015 6.1 million are likely to own one of the devices.

3. Smart watches – just 1% of the UK population has a smart watch (this will change with the launch of the Apple Watch), three quarters (75%) of smart watch owners are male and their motivation to buy one is to be an early adopter.

4. Wearable market – according to a study by Juniper Research, the wearable-tech market is projected to reach $19 billion by 2018, a tenfold increase from 2013.

5. How we hear about them – Waggener Edstrom’s research found the top 5 channels that influenced wearable tech owners to buy were 36% internet, 22% television, 20% word of mouth, 19% instore and 15% social media.

6. Market Growth – ABI Research predicts the total market for wearable devices in sports and healthcare alone would grow by eightfold from 20.8 million devices in 2011 to 169.5 million in 2017.

7. Who wears them – CMO.com found most wearables owners are young, 48 per cent between 18 and 34 years old and men and women are equally likely to have fitness wearable technology.

8. How many wearing now – research from Canalys revealed that 4.6 million devices were shipped in 2014, and that 720,000 of them were running Google’s Android Wear software.

9. High awareness – CMO.com in 2014 found 52 per cent of people polled were aware of wearable technology devices and a third said they’re likely to buy one.

10. Keen to buy – an Accenture survey found that 52% were interested in buying wearable technology such as fitness monitors for tracking physical activity and managing their personal health.

Wearable technology is by no means mainstream. But now that the Apple’s first smartwatch has arrived (24/04/15), there will be no doubt a flurry of renewed interest in wearable devices. Share your wearable devices thoughts below or on Twitter.